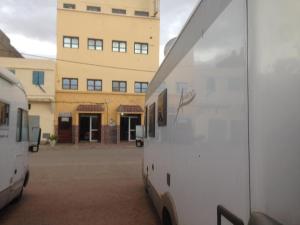 Where to visit near Tarfaya, Morocco

Where to Stay in Tarfaya, Morocco?

Tarfaya is a coastal Moroccan town, located at the level of Cape Juby, in southwestern Morocco, on the Atlantic coast. It is located about 890 km southwest of the capital Rabat, and around 100 km from Laayoune and Lanzarote, in the far east of the Canary Islands. During the colonial era, Tarfaya was a Spanish colony known as Villa Bens. It was unified with Morocco in 1958 after the Ifni War, which started one year after the independence of other regions of Morocco. Wikipedia