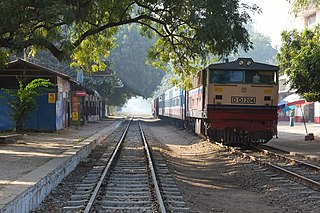 "Myingyan is a city and district in the Mandalay Division of central Myanmar, previously, it was a district in the Meiktila Division of Upper Burma. It is currently the capital of Myingyan Township and lies along the National Highway 2. As of 2014, the city had a population of 276,096 and the district had 1,055,957. It lies in the valley of the Ayeyarwady River, to the south of Mandalay, on the east bank of the river. The area around the town is flat, especially to the north and along the banks of the Ayeyarwady. Inland the country rises in gently undulating slopes. The most noticeable feature is Popa Hill, an extinct volcano, to the south-east. The highest peak is 4,962 ft. above sea-level. The climate is dry, with high south winds from March until September. The annual rainfall averages about 35 in. The temperature varies between 106 and 70 Fahrenheit. The ordinary crops are millet, sesame, cotton, maize, rice and a great variety of peas and beans. There are no forests, but a great deal of low scrubland. Myingyan is the head of the branch railway to Thazi and the main line between Yangon and Mandalay. - Wikipedia"